“Oberst does not perform the role of Lantry, he exists in it.” 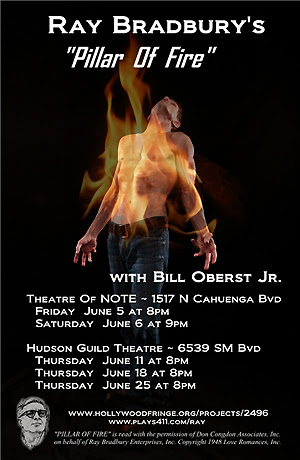 illar Of Fire is unlike anything else Ray Bradbury ever wrote. A conflux of the elements inherent to his style; the fusion of rational with irrational, the lover of literature, the modernist secure in science, the poet, the primitive, the brute; it has none of the amalgamation of these elements that would later appear, as Bradbury had yet to harmonize the distinct voices he bore within himself. In “Pillar Of Fire” the voices each perform in severance, with a purity of pitch that would later be muted in the cohesion of his creative choir. Unlike Bradbury’s later works, Pillar Of Fire is more rage than reflection, more poem than prose, and more horror story than speculative fiction.

Bill Oberst Jr. has chosen his role well. His lean hard body and gaunt face have a cadaverous quality. With nothing onstage other than dirt, he does more than become the role. As the resurrected corpse discovers the world anew, Oberst creates it, becoming the reality of Bradbury’s dystopia for his audience. Oberst does not perform the role of Lantry, he exists in it.

Pillar of Fire is truly remarkable work; one of the very best, if not the best solo show the 2015 Hollywood Fringe had to offer. Winner: Platinum Medal. Winner: Encore Producers’ Award. – Ernest Kearney, June 2015