“A short film. It sounds pretty easy, right? Pumping out a compressed little story in an abbreviated form with a beginning, middle and an end that’s coherent and intriguing… wait, that actually sounds kind of excruciating now that I think about it. Well thankfully for you there’s short subject directors like Michael Bonomo who fully understand what it takes to make not just a great short film but just a great film, period.. 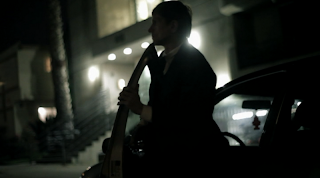 The filmmaker’s sixth short film ASSASSINS is a tale of the fateful meeting of two hitmen; the seasoned, steely-eyed pro Nathan (Bill Oberst Jr., DISMAL) and the newbie Walter (Vicente Disanti) who may just not be cut out for this line of work. Without spoiling the ten minute film too much Walter is a novice hitman whose hit has goes horribly awry. Nathan is then called in to clean-up the mess one way or the other, well there you go. 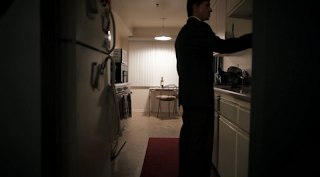 Right from the get go the film is a well-directed, taut and tense beast, it’s a pretty slick short with high production value, attractive cinematography and lighting, tight editing and a low-key but effective score from Kristen Baum (THE BOOK OF ELI).

When it was all over and done with I definitely wanted more in the best possible way, it maintained it’s mystery while revealing just enough, which is pretty impressive for a ten minute film. I was left with lingering flavors of Michael Mann’s COLLATERAL and a few choice bits of Quentin Tarantino’s PULP FICTION as Oberst seemingly channels some of Harvey Keitel’s “The Wolf” from that film, the seasoned professional sent in to clean things up. 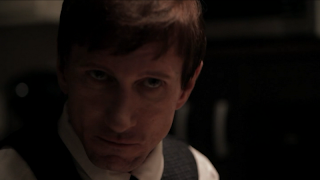 High marks to this tense thriller from Michael Bonomo, be sure check out his website at the link below where you can watch a few of his previous short films. The film is not yet available online as Bonomo will be travelling the film on the festival circuit quite soon. Also be sure to check out Bill Oberst Jr. over at the wickedly interactive Facebook app,  Take This Lollipop, a truly unnerving social media mindfuck that must be experienced first hand to fully appreciate.”