Bill’s performance in Jason Zada’s record-setting Facebook ap Take This Lollipop (still going strong with over 100 million hits at TakeThisLollipop.com, won a string of awards including a Daytime Emmy:

Shannon Hilson reviewed the ap, and Bill’s performance, for MoreHorror.com 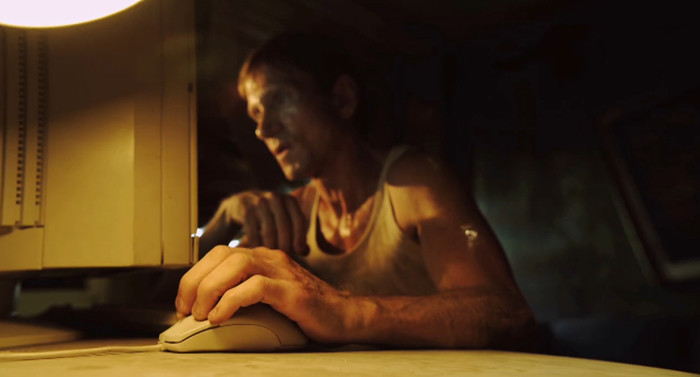 “We’ve all had it drummed into our heads since the time we were little kids that we shouldn’t take candy from strangers… but if you don’t give “Take This Lollipop” a try, then you’re really missing out. Don’t have a clue what I’m talking about? Well, allow me to enlighten you!

Created by television and music director Jason Zada, Take This Lollipop is the latest new Facebook app to catch on and cause something of a buzz… although it is quite unlike any Facebook app you’re likely to have seen up to this point.

It stars up-and-coming horror genre actor Bill Oberst Jr. To get its point across, it taps into a commonly-held fear when it comes to this modern age of Facebook that we’re living in — the fear of the worst possible type of person finding and taking an interest in our own personal corner of what is pretty much the biggest, most important social networking site on the entire internet.

What happens should you choose to accept the lollipop? You’re treated to a superbly-acted interactive experience that lets horror fans experience what it’s like to be stalked by a psychopath via their Facebook, Google, and other similar tools that both keep us in touch and expose us all at the same time.

Oberst plays said psychopath and does a wonderfully frightening job of showing you how it might feel if a dyed-in-the-wool stalker ever did stumble across your Facebook profile and take enough of an interest in you to actually track you down. Screen caps from your actual Facebook page are expertly woven into Zada’s masterpiece, making you part of the experience. This really doesn’t feel like a Facebook app either — more like an artful short film that unexpectedly stars you as an unwitting supporting actor.

At first, I’m not sure I knew what to think of Take This Lollipop, as I had no clue what it was I was looking at. My significant other was checking out the app and I was looking over his shoulder, innocently thinking that he was checking out the latest Bill Oberst Jr. short film. I literally gasped aloud when I saw his personal Facebook profile come up as part of the film and was immediately intrigued, as the whole thing seemed so seamless.

Naturally, it didn’t take me long to figure out what was going on and to want to try it for myself. However, the feeling of unease that rose to the surface as I watched Bill’s character obsess over my silly Facebook photos of me checking Christmas lights, posing outside of the Bubba Gump Shrimp Company with my father last year, or enjoying a barbecue with my family was instinctual nevertheless. Even when you know for a fact that your private information is perfectly safe and protected (as I assure you it is with this app) it’s… odd to see your personal photos and info being ravaged in this way… no matter how fantastic and imaginary the whole scenario is.

At it’s core, Take This Lollipop is a modern approach to something that can’t help but scare us and that’s what makes it such an intriguing new way to approach horror. Facebook is part of all of our lives at this point. It’s only natural for our favorite genre to have found a way to touch on that and make us squirm. Director Zada had the following to say on the subject.

“People keep asking me what sinister plan we’re working on behind it. I just love Halloween, and got the idea about a month ago and decided to shoot it. When you see your personal information in an environment where you normally wouldn’t, it creates a strong emotional response. It’s tied into the fears about privacy and personal info that we have now that we live online. We’re not doing anything crazy with the info. It just makes you feel that way.”